I saw this announcement made on Twitter by David James. The version 1910 is globally available for all customers to install. So you can now get the SCCM 1910 update without running any opt-in script. Finally good news for slow ring customers !!.

While the official 1910 documentation says that update 1910 can be installed on SCCM 1806 and later, the tweet says 1810 and above. I am bit confused but I will wait for response. 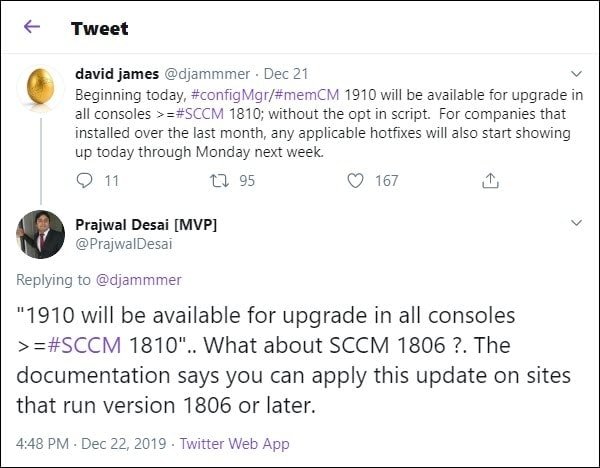 I believe in many organizations, the 1910 upgrade could be delayed because many businesses impose freeze across all production systems. This applies from Thanksgiving until the New Year.

As I mentioned before the ConfigMgr Update 1910 is available as an in-console update. Sites running SCCM 1806 and above are eligible for the 1910 upgrade.

For example, in the above screenshot, I am upgrading from Configuration Manager 1902 to 1910. I can skip the 1902 hotfix roll-up and directly upgrade to 1910.

Listing below are some of the links that should help you to install SCCM 1910.

Hi, my name is Prajwal Desai. The blog provides you basic and helpful articles on SCCM, Configuration Manager, Windows Server and anything that helps IT professionals.